FOR THE FREDERICK NEWS-POST

The Sergeant Lawrence Everhart Chapter of the Maryland Society of Sons of the American Revolution recently honored Frederick resident Donald Deering with the SAR’s Chapter Medal of Distinguished Service. The Chapter Medal of Distinguished Service is the highest medal that can be awarded by a Chapter president. The medal was presented at the SAR Chapter’s annual meeting held at Dutch’s Daughter restaurant, Frederick.

In presenting the medal, Chapter President, SAR Chapter President George Lewis commended Deering “for his conspicuous service to the Sergeant Lawrence Everhart Chapter while serving concurrently as the Chapter first vice president, Chapter color guard commander, Chapter membership committee chairman and the Chapter Frederick Town Fife and Drum director. In addition, SAR Compatriot Deering volunteered to serve, and did so in a most exemplary manner, as the interim Chapter secretary.”

At this SAR annual meeting, Deering was elected president of the Sergeant Lawrence Everhart Chapter of the Sons of the American Revolution for 2015-2016.

Compatriot Deering planned and led the organization and development of the foundational structure for the Chapter’s Frederick Town Fife and Drum Corps, extending the guard’s presentations to local, state and national events. He conceived and led a highly successful effort to establish a Chapter office in the heart of Frederick’s historic district, and he initiated and facilitated a highly successful Chapter internship program to support and promote numerous Chapter programs, according to Lewis.

The SAR Chapter Medal of Distinguished Service is diamond-shaped with a blue SAR insignia surmounted on white enamel background and trimmed in bronze hanging from a drape of solid maroon ribbon.

Sons of the American Revolution seeks to maintain and extend the institutions of American freedom, an appreciation for true patriotism, a respect for national symbols, the value of American citizenship, and the unifying force of e pluribus unum that has created, from the people of many nations, one nation and one people.

The Sergeant Lawrence Everhart Chapter, which serves Frederick County, is Chapter 1 of the Maryland Society Sons of the American Revolution. It was the first chapter formed in Maryland by NSSAR in 1920.

The Chapter is named after Sergeant Lawrence Everhart, who was a resident of Middletown. He enlisted in the Flying Camp in August 1776. He fought at the battles of White Plains and Fort Washington. He is credited with helping to save the life of Marquis de Lafayette at the Battle of the Brandywine. He enlisted in Col. William Washington’s regiment of cavalry in 1778 and became a sergeant. He is credited with saving the life of Col. Washington at the Battle of Cowpens. He served throughout the Revolution. 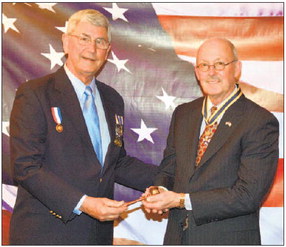