FOR THE FREDERICK NEWS-POST

In ceremonies at its 95th annual meeting, the Sergeant Lawrence Everhart Chapter of the Sons of the American Revolution honored Brunswick resident Richard Foot with the SAR’s War Service Medal in recognition of his honorable service in U.S. armed forces.

Foot was a Commissioned Officer in the U.S. Army, serving a tour in the infantry in the Republic of Vietnam (1970 to 1971). He earned a Bronze Star for “meritorious achievement in ground operations against hostile forces in the Republic of Vietnam.” Foot is a lineal descendant of American patriot William Foote, who fought in the battles of the American Revolution in support of the cause of American independence. Foot’s father, William Frisch Foot, served as a technical sergeant in the Army Infantry in World War II, earning the Asiatic Pacific Theatre Campaign Ribbon, the American Theatre Campaign Ribbon, the Good Conduct Medal and the Victory Medal. The SAR War Service Medal was first authorized in 1899 for SAR compatriots who served in the Spanish-American War. It was subsequently authorized for SAR members who served in World War I and II, Korea, Vietnam, Southwest Asia, Kosovo, Iraq, Afghanistan and the global war on terrorism. Each medal recipient served in the armed forces against a common enemy, and had received a campaign medal, combat ribbon or badge.

Sons of the American Revolution is a historical, educational and patriotic nonprofit, United States 501(c)(3) corporation that seeks to maintain and extend the institutions of American freedom, an appreciation for true patriotism, a respect for the national symbols, the value of American citizenship, and the unifying force of e pluribus unum that has created, from the people of many nations, one nation and one people.

The Sergeant Lawrence Everhart Chapter, which serves Frederick County, is Chapter 1 of the Maryland Society Sons of the American Revolution. It was the first chapter formed in Maryland by NSSAR in 1920. The chapter is named after Sergeant Lawrence Everhart, a resident of Middletown. He enlisted in the Flying Camp in August 1776. He fought at the battles of White Plains and Fort Washington. He is credited with helping to save the life of Marquis de Lafayette at the Battle of the Brandywine. He enlisted in Col. William Washington’s regiment of cavalry in 1778 and became a sergeant. He is credited with saving the life of Col. Washington at the Battle of Cowpens. He served throughout the Revolution. 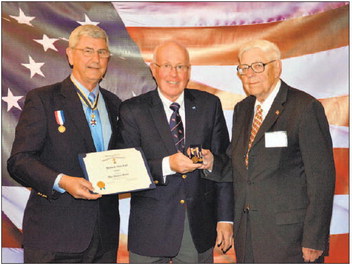