Neighbors speak out against proposed development at Mount Olivet Cemetery

Some of the would-be neighbors of a residential development proposed for the edge of Mount Olivet Cemetery are not happy about seeing their neighborhood grow.

And they let the developers know their feelings Monday at a Neighborhood Advisory Council meeting.

The meeting was held to inform NAC 10 residents that a developer applied to remove an institutional floating zone from a vacant, 12.74acre portion of the cemetery property that runs behind a series of homes on Prospect Boulevard. But discussions quickly veered to details of the proposed development, which includes roughly 90 town houses and a senior living center.

The more than 30 attendees (See MOUNT OLIVET A6) 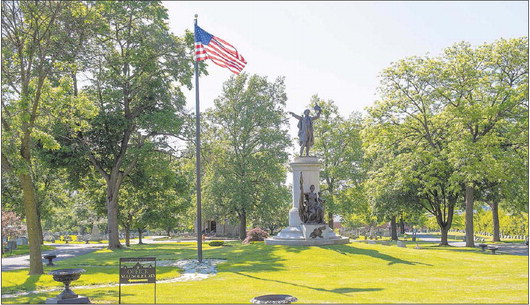 The monument and grave of Francis Scott Key are just inside the front gate to Mount Olivet Cemetery. A new development that consists of town houses and senior housing is proposed on about 20 acres at the back of the property. 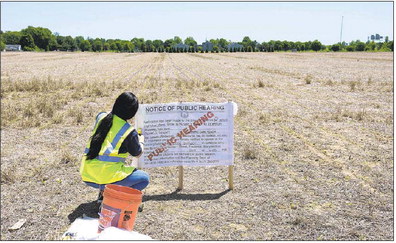 A woman, who declined to give her name, places a sign in a field behind the mausoleum of Mount Olivet Cemetery on Tuesday. A new development of town houses and senior housing is proposed on about 20 acres owned by the cemetery. The property borders Interstate 70, Prospect Boulevard and the cemetery. The sign advertises a meeting scheduled for June.

(Continued from A1) at the meeting voiced concerns about increased traffic and density, and that there is only one way in and out of the proposed development. Several residents also questioned the benefit of adding more homes to an area they say is already overpopulated.

Mike Claxton, whose rear property line is about 50 feet from where the new homes are planned, said he is already frustrated with the amount of traffic and activity in his neighborhood and worries that more homes and residents will just add to the problems.

Dean and the developers assured the residents that before anything is built, the developer will have to pay to complete traffic and school impact studies and adjust the plans if necessary. They also pointed out that the development is in the beginning stages. They said officials will not even consider the proposal until the request to remove the institutional floating zone goes through two city Planning Commission hearings and a vote from the Board of Aldermen, which is expected to take several months.

Institutional floating zones were applied to the city’s zoning map in 2005 when the city’s land management code underwent a comprehensive rezoning. The floating zones were placed over the original zones and designate special uses including schools, hospitals, cemeteries, churches, nursing homes and government offices.

Gabrielle Collard, the city’s division manager of current planning, explained in an email Tuesday that the applicant intends to purchase a total of about 20 acres and has applied to remove the institutional zone on the 12.74 acres to build the town houses. The senior living building is planned for the additional 8 acres near Interstate 70 and will keep the institutional floating zone. Pat Byrne, a developer with the Community Housing Initiative, said Monday that the senior housing facility will be marketed to seniors making no more than 60 percent of the average median income.

George “Tim” Horman, president of the Mount Olivet Cemetery board of directors, confirmed Tuesday that the board is under contract with the developer to buy the roughly 20 acres. He said the details of the contract are confidential and that the sale came about when board members determined that the cemetery had excess land it would never need.

“Cremation has pretty much overtaken our burial stock,” Horman said. “It’s about equal. Cremation may be a little less, but we determined we basically have enough land for the future of our cemetery.”

The cemetery, at 515 S. Market St., dates to the 1850s and contains roughly 150,000 graves. Historical claims to fame include being the final resting place of “Star-Spangled Banner” composer Francis Scott Key and a “Confederate Row,” where 700 Civil War soldiers who fought for the South are buried.

Horman said the proposed new development is 500 to 1,000 feet from the graves. He also said the development is in the beginning stages and may not even come to fruition. If it does, he said he believes it will be a positive addition to the area.

Dean said Tuesday that he understands the NAC 10 residents’ concerns and expected some pushback at the meeting.

“Anytime you’re putting a development in where people have lived a long time and they’re used to seeing a field, you will have people who want to keep it a field,” he said.

And like Horman, Dean believes the development will ultimately be good for the neighborhood.

“The reason I’m optimistic about this development is one, I have a client who’s really wanting to work together with the community to get this right,” he said. “Two, I know the city needs affordable housing, particularly for the elderly. And three, there are many processes they have to go through, such as to determine if the schools can handle the kids and the roads can handle the traffic.”

Dean said he was glad so many residents came out to speak about the project.

“Anytime you have a community meeting, you want to hear what the neighbors’ issues are,” he said.